Julianna and Zsuzsanna Terbe, twins and both players of the Hungarian Baptist Aid, will represent Hungary at the FIDE World Junior Chess Championships held in Tarvisio, Italy from November 13rd to 27th. Julianna and Zsuzsanna are 20, this being their last year before entering the adult competitive chess circuit completely. They always do everything together, which included taking up playing chess at the age of five: the game has been at the center of their lives ever since. Throughout high school they were homeschooled so they had more time to practice and prepare for chess competitions.

Their efforts have paid off: Julianna made her debut with the Hungarian adult national team this year as they won Mitropa Cup, an annual tournament for Middle European national teams. She also attained the FIDE Woman International Master title in 2017. Both sisters won their national age group championships several times.

To Julianna and Zsuzsanna, chess is clearly not just a game. Julianna claims chess taught her to make her own decisions and claim responsibility for them at an early age. They also believe that chess is great for improving discipline, concentration and logical thinking. For these reasons, they are just as committed to passing on this knowledge and helping young people spend their free time in a productive way as they are to competing.

It was this desire to help that led them to start „talent center” Polyhistor Academy with their coach and Julianna’s partner Adam Radnai, where, besides teaching chess to private students, they seek to get this message across to people in need or in more remote areas. Their current activities include a winter tour of Hungarian Baptist elementary schools where they teach basic chess to young students, as well as a training program for teachers who are taught to introduce kids to strategic board game thinking using playful, fairy tale-like metaphors. They are also set to organize a chess tournament for homeless people this December, working together with Baptist charity organization Utcafront. 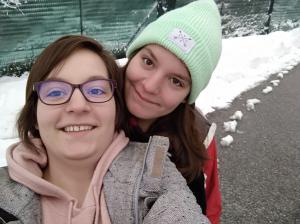 On the afternoon of September 10th, ’Anne Frank – History for Today’ travelling exhibition opened on the 70th anniversary of the Holocaust at Vendéglátó, Idegenforgalmi és Kereskedelmi Baptista Középiskola és Szakiskola (in English: Baptist Secondary School and Vocational School of Catering, Tourism and Trade).